Hoath – Snapshots of the Past

Hoath, or “boggy heath” is located on a promontory approximately 100 feet above sea level. To the east lies the ancient parish of Chislet and the Chislet Marshes; and the hamlets of Grays, Marshside, Boyden Gate, Chitty, Upstreet and Grove Ferry which pick out the shoreline of the old Wantsum Channel. To the west, rising ground leads to woodland, the Blean, which encircles Canterbury to the north, and beyond; and also Herne. Northward lies Reculver with strong Roman and Christian links. Southward is Sturry and Canterbury’s port, Fordwich, once on a finger of water far broader than the River Stour we see today that lead south-westwards from the Wantsum.

Hoath is a rural community in the midst of other rural communities. Through Maypole and Ford passes the Roman road from Reculver, an important military base, to Sturry, with its routes to Canterbury and beyond, and easy access to Thanet via the Sarre crossing. The Blean would provide pannage for swine, timber for homes, boats and implements, and fuel for heating and cooking. There were sufficient benefits for the back-breaking work of clearing the forest to utilise the fruitful soil and it has been suggested that our predecessors may have moved here from the coast and the Wantsum shore to utilise the benefits that the woodland provided. 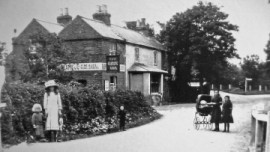 The Gate Inn at Boyden Gate and Hoath mill 1910

The shingled spire of Holy Cross Church is a prominent landmark, leading to the centre of the village. In the Church is a copy of the 1839 Tithe Map which shows a detailed plan of the parish and confirms the road layout then is almost identical to that of today. With the map is a list of the landowners and tenants then in the village, by name and the amounts each had to contribute. From 1801 the ten yearly census provides population statistics for the parish which was 271 in the first census. Thereafter the figure was consistently in the 300’s with fluctuations, through to todays tally of about 400 electors plus those under voting age.

A survey of church attendance carried out across every church in the country on 30 March 1851 put the Hoath morning attendance at 84, down on the annual average of 95. These figures may include some travelling from Reculver as services then alternated with Reculver, the mother Church of Hoath. Afternoon services were even more popular, when the average weekly attendance was 160. The 1851 census put the village population at 359. Also in the village was a Wesleyan Church under the auspices of Richard Larkin, blacksmith, which he had formed in an outbuilding “with a view to cultivate the minds of a quantity of rude Boys which were constantly voilating (sic) the Sabbath in our village…. .” The attendance at the evening service was 53.

In 1303 Pope Boniface VIII let Hoath have its own churchyard and font. This saved the journey to Reculver each time there was a funeral. The parish of Reculver was a widespread one, also encompassing St. Nicholas, Herne and Hoath. In 1310 Archbishop Winchelsey appointed a priest to be perpetual vicar of Reculver with Hoath. Two other priests were similarly appointed to minister at Herne and at St. Nicholas. The parish was effectively split into three smaller ones, with the Vicar of Reculver senior. Each year on Whit Monday, each church was required to come in procession to Reculver and again on 8 September, Reculver’s patronal festival. 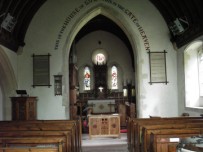 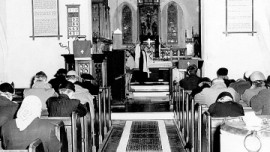 Hoath has never been an ecclesiastical parish on its own but linked with others. It was part of Reculver until 1960, then linked with Chislet, then St. Nicholas, informally with Herne and recently back with Reculver.

Robert Hunt was born in Hoath about 1570, and became Vicar at Reculver and Hoath in 1595. In 1607 he sailed to America in a convoy of three ships. Upon arrival, they “did hang an old sail to three or four trees to shadow us from the sun; our walls were rails of wood, our seats unhewed trees, our pulpit a bar of wood. This was our church,” to celebrate their first communion. From this humble beginning rose the Episcopalian church in the new world.

At Ford once lay a Manor House which was a residence of the Archbishops of Canterbury. There were a number of them across Kent. It was the most impressive building in the locality. Nothing remains of it today. In the time of Elizabeth I, Ford fell out of favour with Archbishop Parker, who preferred another local episcopal property at Bekesbourne. Ford Manor House, which was by then “old, decayed, wasteful, unwholesome and desolate.” Elizabeth refused to allow its demolition and it survived until the Commonwealth when Parliament ordered its destruction and the materials were sold. 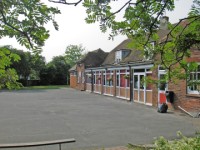 Hoath school in 1937 (Coronation) and now 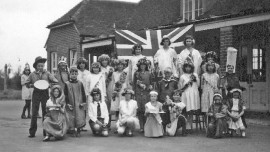 A darker moment of village history occurred on 2 May 1863 when Richard Steed, a Maypole resident was savagely murdered on a lonely footpath as he journeyed home from Herne. Alfred Eldridge, who lived for a short time in Hoath with his wife and young child, was convicted of his murder and subsequently hanged at Maidstone, in what was the last public hanging in Kent. Steed lies buried in Hoath Churchyard. His name can be read on his headstone, but the inscription “Give him eternal rest O Lord and let perpetual light shine upon him” has now eroded away.

Knaves Ash, Shelvingford, Bristle’s Corner. Names that represent locations in the parish of Hoath. All invite further comment, but on another occasion ……

Books and videos about Hoath

“Hoath and Herne : The last of the Forest” ( ISBN number 0950242373) is an inexpensive hardback published in 1984 which can be purchased from a number of online book stores, including Amazon and Buylocalbooks.

“Memories of Hoath” is a video produced by Hoath villager Robert Nash. DVD and VHS versions are available for £10 ( plus P&P). Profits to the Hall restoration fund. Email us for details on how to get your copy.